Joints are attachment points between components used to create mechanisms based on rotation.

These are the four most common types of Vex Joints:

This is the go-to joint in Vex for low-torque rotation applications. Because it is securely fastened to one of the two components, it effectively halves slop and reduces friction in the process. It also benefits from the round shape of the screw combined with the round interior of the bearing.

Assembly: This joint is assembled by first securing a screw to one component with a keps nut and attaching a bearing to the second component. Then the screw is placed throught the bearing and secured with a lock nut.

This screw joint is used to attach the rollers to an antitip mechanism on 7700R's Tower Takeover Robot. Since the holes in the rollers are round, they rotate freely and with little friction around the screws. 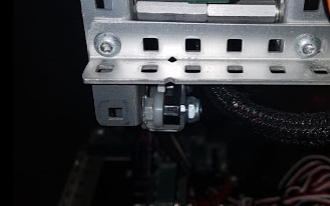 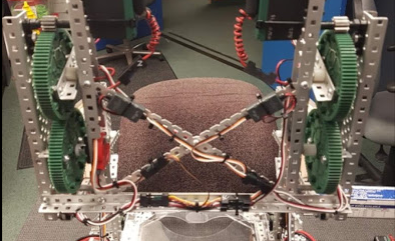 This screw joint is used to mount one bottom four-bar of 5225A's In the Zone Lift. This mounting solution allows for low friction on the lifting joints, and with 12 of these joints in total, minimizing friction on each is important.

Assembly: This joint is assembled using a shoulder screw, which is seated more tightly in the metal than a convential screw. The screw is placed through one component, followed by a washer, followed by the second component and is secured with a lock nut.

This is a high-friction, high-slop joint which is used in applications which involve a motor or gears, since a screw joint would not be able to translate rotation the way an axle joint does.

Assembly: This joint is assembled by first securing one bearing to each component. Then, the axle is fed through both bearings, with a spacer in between, and secured using a shaft collar at either end.

This low strength axle joint is used on one lower gear of 5225A's In the Zone Lift. Although the other gears use screw joints to minimize friction, this one utilizes an axle to translate the gear's rotation to a potentiometer, which measures the lift's height.

This is a high-friction joint which is very effective in high-torque and cantilevered (only supported on one side) applications due to the strength of Vex High Strength Axles. This joint should be used only in very high-torque operations, as it does produce more friction than a single-bearing screw joint.

Assembly: This joint is assembled by first reaming or drilling (drilling is preferred, but reaming is an acceptable alternative) a 1/4" diameter hole (or slightly larger to accomodate for wiggle) in both components, securing a high strength bearing to each. Similarly to the low strength axle joint, the axle is fed through both bearings with a high strength washer between and two high strength collars to secure it.

Contributing Teams to this Article: