The BeagleBoard was designed as an educational board with open source software development in mind. It has gained popularity in colleges around the world.

This document is slightly out of date as Beagleboard has launched new products which can be seen here.

The BeagleBoard measures approximately 7.5 by 7.5 cm and has all the functionality of a basic computer, including an ARM Cortex-A8 CPU, a DSP for accelerated video and audio decoding, and a GPU to provide accelerated 2D and 3D rendering at up to 720p that supports OpenGL ES 2.0. Its design is available under the Creative Commons Share-Alike license.

Android, Angstrom Linux, Arch Linux, Ubuntu, Windows CE, and others have been shown to be usable on the BeagleBoard. An OS can be booted from the Flash memory, the SD card, or the serial connection.

Video output is provided on an HDMI connection. An SD/MMC card slot, a USB port, an RS-232 serial connection, and two stereo headphone jacks for audio input and output are provided. Built-in storage and memory include 256 MB of Flash memory and 256 MB of RAM (128 MB on earlier models). The board uses up to 2 W of power and can be powered from the USB connector or a separate 5 V power supply; no additional cooling or heat sinks are usually required. 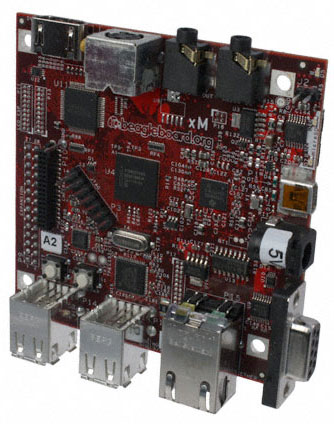 An S-Video port complements the HDMI/DVI-D port and theoretically allows the addition of a second display. A camera port on the xM provides a simple way of importing video via Leopard Board cameras, but such functionality is hardly useful in practice.